Gorgeous white beaches, clear water and rocks, Salento is the new gay destination of Italy. Salento is that piece of land in the South-east of Italy, ‘the heel of Italy’s boot’, where Adriatic Sea meets Ionian Sea. It takes about 2 hours by car from Bari.There are so many cities to visit and so many things to do. The first thing to do is visiting Lecce, its capital, and its baroque towns as well as a swimming in one of the marvellous beaches of its coastline.Recently, Salento has become one of the two most popular summer destinations, along with Torre del Lago in Versilia Coast, Tuscany.But why is Salento the new gay summer destination of Italy?  Let’s see what offers to gay people.

Gallipoli: The Gayest city in Salento 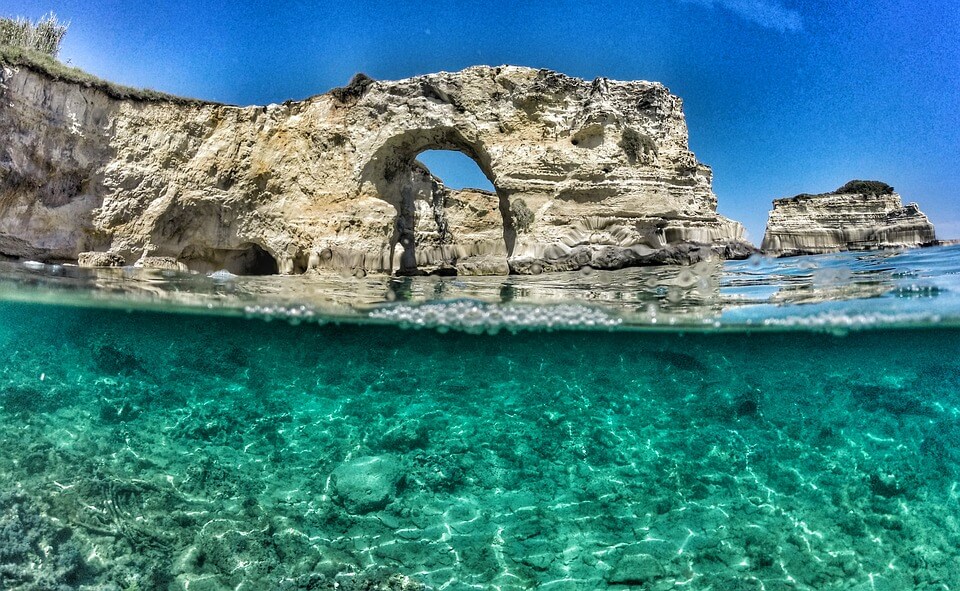 The main gay destination of Salento is Gallipoli, a city that locals call “The Pearl of the Ionian Sea”. This is the city where the Salento Pride takes place every year on August, starting from the seafront and ending with parties at Por do Sol Beach and in the many clubs in the city. Salento Pride, a relatively ‘young Pride’, has already become a very important event for the local gay community.One of the best known gay beaches in Gallipoli is in Punta della Suina, a natural oasis where you can find beautiful sea, rocks and welcoming hot men. Here you can relax with friends, drink some cocktails and have fun with an amazing view of the Gallipoli bay.When the sun goes down, this is the moment when the gay nightlife of Gallipoli starts to burn! You can start your night drinking with friends at LED Cafè, the gay bar in the city center of Gallipoli. This is the perfect place to discover, during your stay here, where the hottest parties will take place. The best way to continue your night is dancing at Picador Village. In this club, you can have fun with gay locals and thousands of men, italian and foreigners, that come here every year!If you love white beaches, this is the right place for you. Porto Selvaggio, 20 minutes far from Gallipoli, is a place absolutely loved by gay naturalists.Further away from Gallipoli, Lecce is another gay option. Salento’s capital, Lecce is known for its historical center and for its gay nightlife. Marylin Bar is the main gay bar of the city and, since Lecce has no gay beaches near, it’s the best choice to find out what else to discover in the Salento area.Before you come back to Bari, be sure to make a stop at the naturalistic bay of Torre Guaceto, near Brindisi: a beautiful gay beach that you can only reach by foot.